There are a, ahem, coupla’ reasons to visit Clapham Common station.

The first is the single island platform, identical to the one at Clapham North, both of which are the only such layouts still in existence on deep-level Underground lines.

The second is above ground. It’s the intriguingly (some might say dangerously) exotic confection that sits over the main entrance:

It’s rare to find the Underground flirting with anything so continental. It’s even rarer to find it getting away with it. Perhaps it’s the logo that’s key. Its reassuring typeface and dash of provincial antiquity  offsets any passing architectural indulgence.

But don’t worry. On encountering the cupola, if you’re prone to suffer from cosmopolitan stirrings, you can always nip on to the nearby common to relieve any tautness. 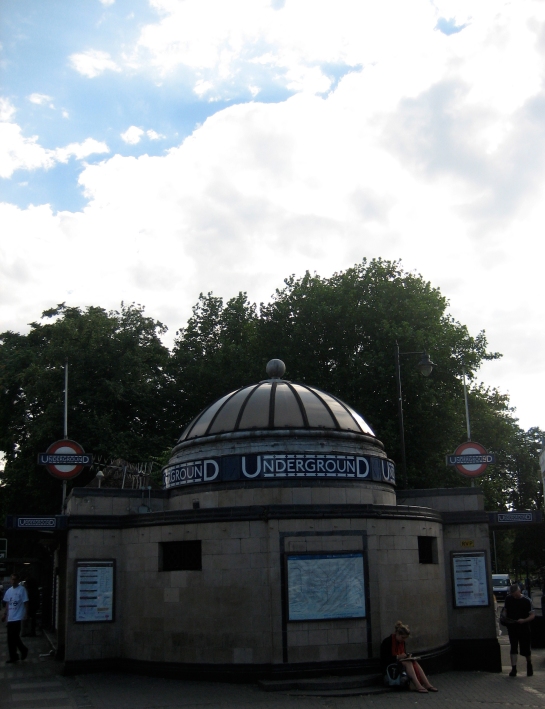 This is the only decent bit of Clapham Common station to break ground. There’s a small, rather lumpen pavilion on the other side of the road that contains another way down to the ticket hall, but it can’t compete with this fey treat.

There’s a faint whiff of Catholic chintz about it. If the pope were to endorse this kind of architecture, his popularity might get another unlikely boost. But given its devoutly secular antecedents, I’m not so sure. Could Francis ‘ford this cupola? I suspect his fellow cardinals would prefer apocalypse – now.

Yet even if this very-late Victorian fancy (c. 1900) doesn’t tickle yours, there’s something hanging inside to twitch even the devoutest of souls:

Cupola? I barely knew her!

I don’t know much about football, but I know what I like. And that’s a new rule that means goalposts get moved an inch wider apart for every minute of extra time until someone scores. Oh, and teams should be able to bring an additional person on to the pitch, again for each minute of extra time. Basically I’d like to see pitches with ginormo-sized goals and about 50 players. Perhaps this music could be played at the same time.

You think these suggestions would make a mockery of the beautiful game? It’s SURELY no more of a joke than having players [finger-pointing rant alert!] earn more in an hour than I do in a year, or something like that. Sigh.

Anyway, what I really really like about football is there’s an Underground station that shares its name with one of the most famous clubs in the country, and which has a staggeringly beautiful roundel mosaic above its entrance:

It’s almost too good to be stuck on the wall of a station in a quiet suburban street along which crowds of people pass at best only once a week.

In fact, it is too good to be stuck here. It deserves to be seen by as many folk as possible, and that’s never going to happen in Highbury, even if the eponymous club became the best in the world on the same day Morrissey decided to move in next door.

The scale of the mosaic would seem perverse and its craftsmanship ostentatious were it not so sense-bubblingly beautiful. It was put up during the glory years of the 1930s (and yes, it’s not often you see that combination of words arranged in that particular sequence). It gains even more points for having replaced yet another of the uber-ubiquitous ox-blood tiled exteriors, of which there are still ox-bloody too many.

If movable goalposts and ever-expanding teams aren’t on the agenda of the next Football Association AGM, can I suggest a works outing to Arsenal station? It’s the closest they’ll get to seeing any true artistry this season.

I’ll be honest: I’m not really a fan of domes.

They are fussy and pompous, and have a tendency to look comical, if not downright silly. If I see a row of them on a skyline, I immediately get suspicious. Who’s had the final say here, I ask myself: a sermon or a slide rule?

Seeing a dome in a non-religious location tends to make me even more uneasy. The sacred and the secular are fine side-by-side, but on top of each other? There’s a necessary world of difference between swearing inside a church, which I’ve done happily several times, and swearing in the face of an archbishop, which I’d never do*.

It’s a relief, therefore, to have at least one example in London of a dome serving no purpose whatsoever but still managing to not look entirely out of place. And it’s even better to have that dome atop an Underground station: 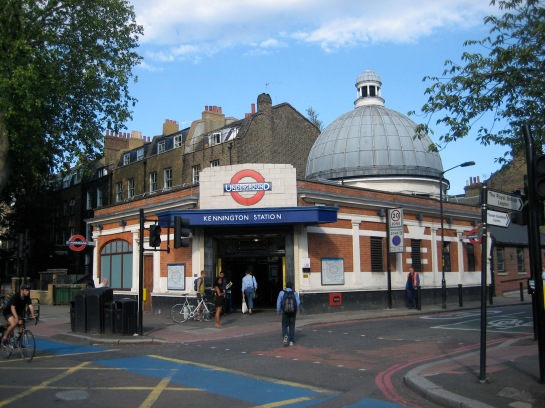 Yes, it’s a gigantic anachronism. But there used to be a flock of these daft things, dotted all along the southern extension of the Northern line like elderly clergy in a tardy religious procession. I’m not sorry that only one survives. This dome gains merit because of its solitary status.

Architecturally it looks utterly absurd, and I’ve argued on this blog several times that just because something is old does not mean it is a) good or b) not worth destroying.

But Kennington station is an exception, because the dome isn’t actively idiosyncratic. It’s irrelevance isn’t aggressive. Instead it’s a passive period piece, reassuringly demoted in stature to a more lowly rank behind the 1920s makeover (yes, those are Charles Holden’s fingerprints on the entrance).

It’s also something of apt tribute to the first-ever deep-level Underground line, which opened here as the City and South London Railway in 1890. Bluster, folly and ingenuity got that line built – and all three are present in the dome.

T. Phillips Figgis was the man responsible for the design. I’m instinctively wary of anyone who feels the need to reduce their first name to an initial. What have they got to hide? But if Mr T’s work at Kennington is commendable more for its robustness than its style, perhaps a dome with no real function is fitting for a man with no real identity.

*Though I’d make an exception for certain Catholic cardinals.