One of my favourite photographs of the London Underground was taken on New Year’s Eve, 1962.

It doesn’t feature any trains or tunnels. There are no platforms, escalators or booking halls to be seen. It doesn’t even include a station. Instead, it shows a group of people standing by one of the subway entrances to Piccadilly Circus, balloons and cigarettes in hand, wrapped up in coats, hats and boots, waiting for something to happen. Around them, all is snow and slush and electric lights and excitement. The Swan & Edgar department store rears up behind, by now well into its dotage but still a commanding presence. And somewhere down below, oblivious to all of this, ignorant even of the turning of the year, the Underground goes about its business.

The photograph, which I’ve uploaded here, was taken by Edwin Sampson, whose work appeared in a number of newspapers in the early 1960s. It doesn’t look particularly posed or staged; it could almost be a snapshot caught on camera by a tourist or passer-by. Yet it bears the traces of a professional. You can tell this from the way the scene is lit so beautifully, but so casually. The Underground roundel and ornamental balustrades look particularly gorgeous. They feel almost on a par with the Christmas decorations. They’re certainly of equal elegance.

Monochrome is a wonderful leveller. While it reduces contrasts, it also raises everyday objects to the same status as the exceptional. The subway entrance is the star of Sampson’s photograph; the balloons and fairy lights and handsome loiterers form part of the supporting cast.

Today, the entrances still look almost as good as they did half a century ago, though daylight and colour shows up rough edges and shabby hues that can be hidden in a black-and-white photograph. The lampposts are bearing up the best. The roundels have become targets for stickers and adhesive calling cards, which even when removed leave a nasty residue.

It goes without saying the rest of Piccadilly Circus has changed. There is more sprawl and less subtlety; greater pretension and nowhere near the same reticence. But then the same goes for most of central London. It’s just a question of adjusting your expectations. You can still mooch moodily by Underground subway entrances – so long as you don’t mind doing it next to cacophonous traffic or alongside gutters full of free newspapers and discarded Big Bus Tour ponchos.

When the day comes I finally sit down and write that musical about the Underground I’ve been mulling over for about 20 years, these particular subways will be one of the key locations, along with the steps at Wembley Park, the escalator at Canary Wharf and the whole of Gants Hill. Until then I’ll continue to gaze wistfully at the graceful furnishings with their evocations of make-believe days and frosty nights, and dream of Piccadilly palare between me and the boys in my gang.

Just north of Queen’s Park station on the Bakerloo line, you experience something I’m pretty sure you can’t do anywhere else on the Underground.

You get to pass through a carriage shed.

That might not sound particularly tremulous, and I grant you it’s not on a par with the kind of sensory overload you endure on a ghost train or enjoy on a seaside tram. But it shares the same novelty value. And if you’re in the mood, there’s a tingle of excitement to be had from peeping inside somewhere it feels you’re not meant to go.

If you’re heading north, you trundle through entrance 21, past a very old (but still perfectly legible) 10 MILES AN HOUR warning sign. Once you’re inside, look out of the right-hand windows and you’ll probably see a couple of trains sitting in berths 22 and 23, not really doing much. You’ll possibly spend a minute or so doing the same, before your train is given a green signal to carry on up the line to Kensal Green: nemesis of all connoisseurs of The London Game.

If you’re heading south you’ll probably come through number 24. Whichever track you end up on, however, the effect is the same: a moment of anxiety as you conclude you’re sitting in a train that’s been sent to the sidings, followed by a longer moment of embarrassment when you realise your mistake. 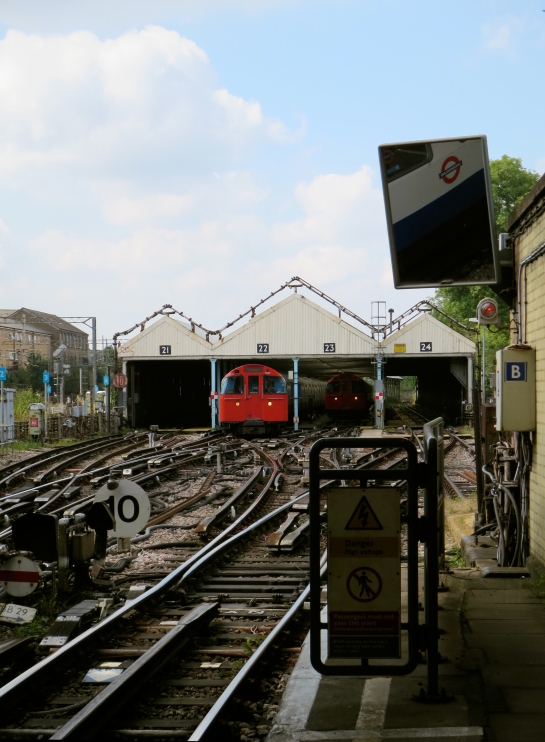 When you pass through the shed, I wonder under whose jurisdiction you fall. I can imagine there are issues over “conveyance”, with unions and management holding urgent negotiations to agree terms of safe passage. I hope there are “lucky” entrances, and that superstitions have built up around particular numbers. In bingo lingo, would you prefer two little ducks or a knock on the door?

Stand at the northern tip of the northbound Bakerloo platform at Piccadilly Circus and it feels like you’ve strayed into a corner of London that isn’t finished. You’ve wandered off the edge of the film reel. A bit of reality’s scaffolding has fallen away. The view you have is one you ought not, by any conventional, predictable measure of the Underground, to be seeing.

And yet there it is. A platform that isn’t. Or is it? 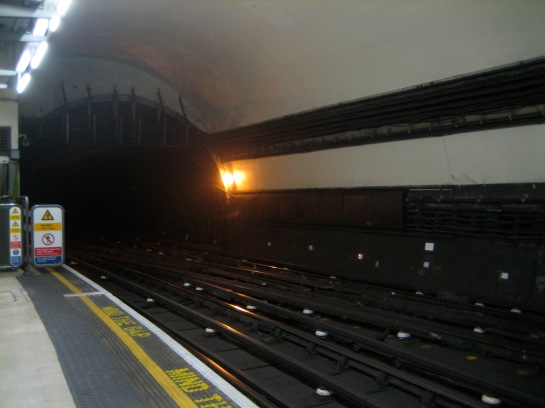 Behind you, a double set of rails curves out of the darkness. They part, clearly bound for different destinations. Yet from your vantage point, those destinations dissemble into something of a dimensional muddle.

Oh dear. You’ve blundered through the bit of wallpaper by the closet that took Homer Simpson into the land of 3D pointy things. Or possibly looked into the heart of the Tardis. Or else there’s a bit of a misalignment of platforms, thanks to a bit of a miscalculation of tunnelling, causing a bit of a miscellaneous great thing about the Underground.

Look, there’s the end of a train. Or is it the front? There’s nothing telling you not to stand here – except every instinct in your body, and every synapse of your brain.

And yet.. it’s really rather fun. 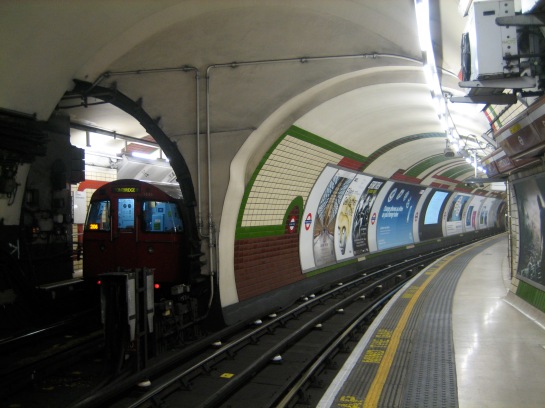