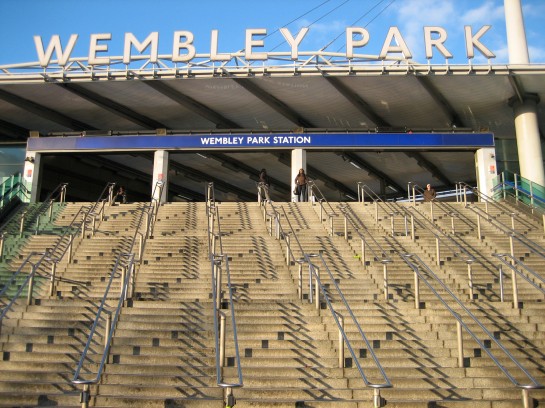 If anyone were to ever write a musical about the Underground, and were that musical then turned into a big budget film, this would be where the opening number would unquestionably have to take place.

It was finished in 2007. I’ve no memory of what was here before, having moved to London in 2006 and only first visited the station soon after the refurbishment was complete. I believe some sort of temporary staircase was thrown up in time for Euro 96, the kind of “temporary” that turns into “10-year residency”.

The Euro 96 connection was rekindled when David Seaman joined Ken Livingstone to officially open the reshaped station building. I love this quote from the former England goalkeeper:

“It’s great to see the Wembley Park Tube station in action today… Wembley Park will certainly be a fans’ favourite.”

There’s no doubt the steps help contribute to an exciting prelude of emotion for anyone heading to a sporting event at the stadium:

For those beating a retreat in the opposite direction, however, there’s another treat for the eye: a mammoth, brilliant-white, conical turret soaring high above the steps and into the sky:

It’s almost enough to turn me into a sports fan.