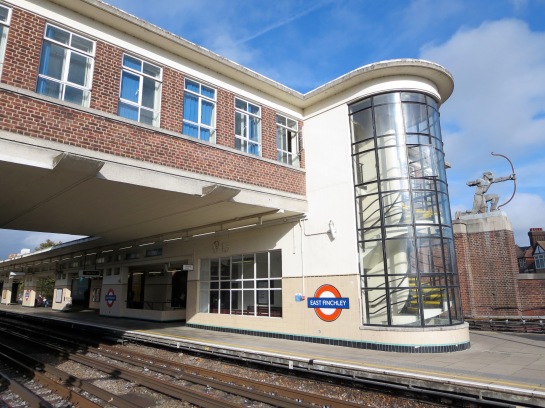 When I began this blog, I had a shortlist of only a couple of dozen places about which I knew I wanted to write. That was all. There was no grand plan of campaign, no strategy to help me get to 150. I trusted the Underground to serve up its delights as and when I chose to search them out.

Before I reach the end, however, I do need to make one final, slight return.

East Finchley station is of a piece with its archer. The platforms, canopies, buildings, walkways, stairwells, even the handrails and window frames, are close to perfection. Its curves are as exquisitely-formed as the phrasing of Debussy’s Clair de Lune; its structured elegance equals that of Larkin’s Whitsun Weddings. Its swagger, meanwhile, has the same joyous dashes of stylish exoticism as Ron Grainer’s sublime title theme for One of our Dinosaurs is Missing. 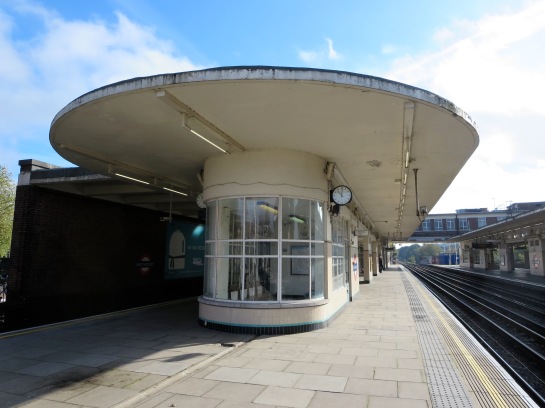 In other words, it’s a mighty evocative place.

And there’s plenty of room to encourage so much evocation. East Finchley station has four platforms, broad enough to feel more like continental thoroughfares than provincial embarkation points.

Here you can loiter, brood, mither and mingle without ever feeling ill-at-ease or out-of-sorts. It’s a nice place to have to wait. I’d go so far as to say it’s the kind of place at which you want to have to wait, whether to catch or change trains. The empty space is as much a part of the conception and purpose of East Finchley as the buildings. It’s one of the most holistic creations on the entire network.

The fact it’s also one of the most beautiful is, naturally, an enormous boon. But then it is the work of Charles Holden, the man without whom this blog would not have been possible.

Well, perhaps not impossible, but a hell of a lot shorter. Which, for those who would have preferred a mere two dozen entries, might not have been such a bad thing.

A Senate House-sized salute to Charles. London belongs to him.

There’s no great significance in choosing this to begin with. Proximity is, I suppose, the main reason. East Finchley station is a couple of stops southbound from where I live. I travel through nearly every day and invariably catch a glimpse of the archer, though it’s not best seen from a passing train. To fully appreciate its character and design you need to leave East Finchley station, turn around and look up, just above the main entrance.

It’s the work of the sculptor Eric Aumonier (1899-1974) and is positioned so that you only see it on entering the station – in other words, on beginning your journey. In another non-coincidental touch, the implied trajectory of the archer’s arrow traces that of the line itself, about to dive underground into what was for a time the longest tunnel in the world: a little over 17 miles to Morden.

The sculpture is now more than 70 years old. It was unveiled on 22 July 1940, a moment in history when appreciation of public transport design was assuredly not high up in the nation’s consciousness. Yet it must have caught the eye and hopefully roused the soul. As London Transport’s staff journal said at the time: “It is more than a decorative device; it is powerful symbolism.”

It still is. It points the way down the line to the rest of the network and to London itself: home of some of Aumonier’s most famous creations, including similarly Art Deco sculptures inside the old Daily Express building, and a relief of the “South Wind” on the exterior of London Underground’s head office itself (of which more anon).

Brilliantly sited, fantastically realised, impishly styled and enduringly relevant, the archer sums up pretty much everything worth celebrating about the Underground.

Hmm. On reflection there is an awful amount of significance to picking this as the first of the 150.