When the retail complex that shares this station’s name was opened in the 1970s, a problem was created that has yet to be solved: how to persuade people intending to visit Brent Cross shopping centre that they should not use Brent Cross Underground station.

The two are far enough apart, with enough inaccessible and near-insurmountable road junctions in between, that it’s easier – and safer – for prospective customers to travel one stop further up the Northern line to Hendon Central and walk from there. Having once lived in the area for two years, I know this to be true.

I also know that, as a consequence of the bungled planning and construction of Brent Cross shopping centre, local residents (not consumers) are blessed with a rather lovely station whose bearing sits wonderfully at odds with its neighbourhood.

Because this is a building that is Brent all out of proportion: 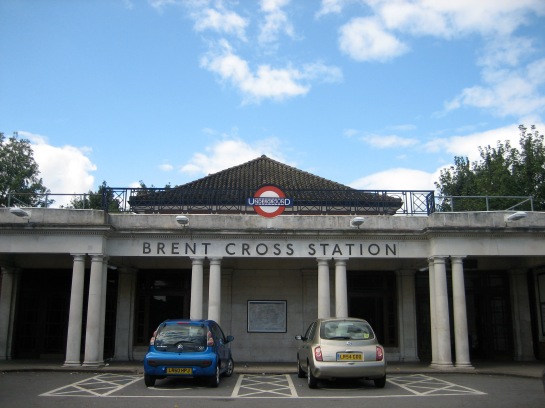 It was designed by Stanley Heaps, opened (as simply ‘Brent’) in 1923, and then as now defies the template of the surroundings. In its early days this meant radiating the deportment of an ornate cricket pavilion that has tumbled through time to the Roman era and back again, while all around was farmland. Nowadays this still means radiating the deportment of an antiquity-wrought sports venue, but in 1950s suburbia.

The contrast is startling but a pleasure to witness in action. There’s something rather charming about the sight of barely-conspicuous folk using such a boldly conspicuous creation, with its stylishly-sparse colonnades and homely-tiled roof, and thinking nothing unusual of it.

It’s a sensation that is heightened just round the corner, where you can find a little-used second passageway to the station, together with a proper Underground roundel, in just about the most unexceptional street you can imagine:

Imagine if you lived in that house right next to the entrance. You could stay indoors until your saw a train in the distance, amble outside, down the path, through the station and up on to the platform ready for the very moment the carriage doors opened.

Granted, none of this is any use to you if trying to get to Brent Cross shopping centre. But then you shouldn’t have got off at Brent Cross station in the first place.