There’s not much that’s great about Epping as a terminus. In fact, it’s lousy.

The station buildings don’t come anywhere near to matching the splendour of Uxbridge or Cockfosters. They are reticent rather than rampant. Dowdy and lumpen, they look embarrassed to even exist. Which is not surprising, given they manage to be upstaged by a bus stop:

No, what’s great about Epping has nothing to do with its architecture. It’s entirely due to the peculiar yet beguiling sensation it evokes from being the end of the line… but also not the end. 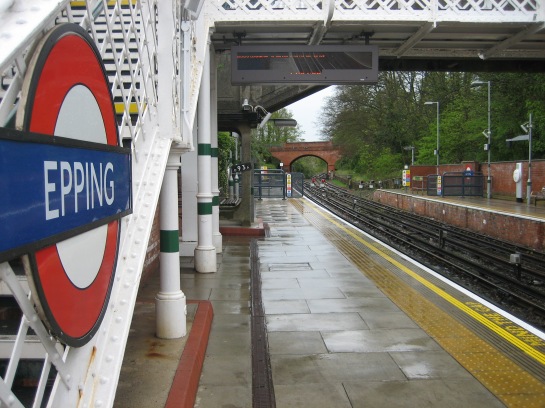 If you linger at the far end of the platforms, you can see the tracks continuing round a corner and under a bridge. They tease you with the thought of what lies just out of view. They also taunt you with a memory of how things used to be.

Because not that long ago Central line trains continued down those tracks; the year Tony Blair became leader of the Labour party, for want of a chronological toehold.

Now the tracks are just a broken limb of the Underground, severed from the host. Their presence, but also their purposelessness, give Epping that curious, affecting feel of being neither one thing nor the other.

It’s a station of sad sighs and sidings.

A terminus that isn’t: like a seaside town out of season.

If you like steam trains and packaged nostalgia, an arbitrary chunk of the old “Epping for Ongar” line runs on those days when its private owners think they’ll be enough customers to guarantee a profit.

If you like proper heartfelt if hopeless nostalgia, Epping is open all year round except Christmas Day. Its platforms are going nowhere. Rather like its prospects.