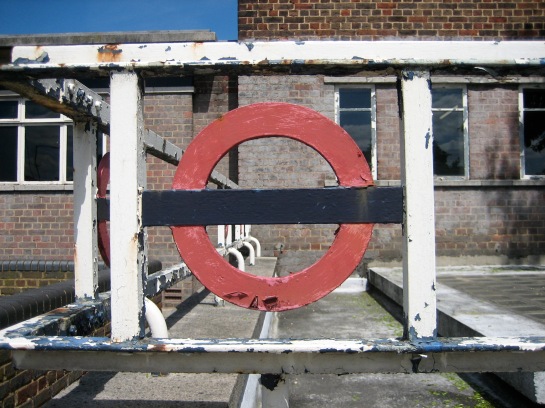 This is possibly the shabbiest thing I’ve included in this blog so far. And frustratingly, it would be one of the easiest and cheapest to remedy.

I’m not sure if there’s regulation paint available from TfL central stores for the decorating of roundels. Come to think of it, I’m not sure there’s even a central store. But oh, I wish there was one, from which a few tins could be sent up the Central line to give this lovely little roundel and its row of neighbours a fresh coating of red, white and blue.

Failing that, how about an initiative launched by the local community? Then again, I’m not sure there is much of a community along the Eastern Avenue. I see that Jessie J was born in Redbridge. Perhaps she could front a campaign and raise a bit of money doing what she does best*.

The station has been given Grade II-listed status, but I don’t know if this includes the bits round the back, where these weathered balustrades keep watch: Cold War relics with less menace than Checkpoint Charlie but just as much elan.

Equally gorgeous is the roundel-esque roof of the ticket hall, which foreshadows by a whole 40 years the kind of alluring mix of concrete and illumination you can find studded along the Jubilee line extension. It also looks like part of a studio set from an early-80s episode of Doctor Who, but I’m willing to forgive it that.

Perhaps when they come to do up the roundels out the back, they could make good in here as well. 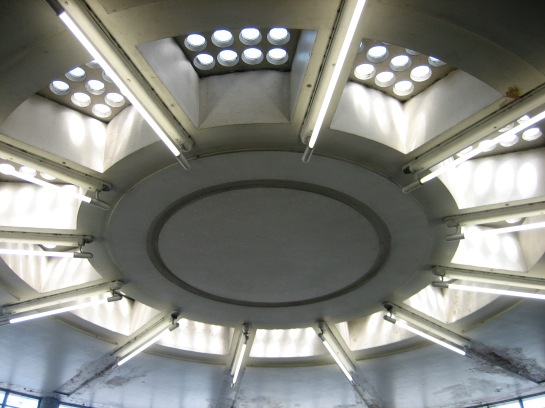 *By not singing. I’d sponsor her.