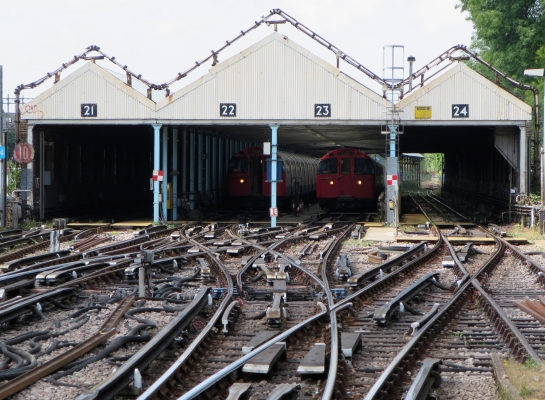 Just north of Queen’s Park station on the Bakerloo line, you experience something I’m pretty sure you can’t do anywhere else on the Underground.

You get to pass through a carriage shed.

That might not sound particularly tremulous, and I grant you it’s not on a par with the kind of sensory overload you endure on a ghost train or enjoy on a seaside tram. But it shares the same novelty value. And if you’re in the mood, there’s a tingle of excitement to be had from peeping inside somewhere it feels you’re not meant to go.

If you’re heading north, you trundle through entrance 21, past a very old (but still perfectly legible) 10 MILES AN HOUR warning sign. Once you’re inside, look out of the right-hand windows and you’ll probably see a couple of trains sitting in berths 22 and 23, not really doing much. You’ll possibly spend a minute or so doing the same, before your train is given a green signal to carry on up the line to Kensal Green: nemesis of all connoisseurs of The London Game.

If you’re heading south you’ll probably come through number 24. Whichever track you end up on, however, the effect is the same: a moment of anxiety as you conclude you’re sitting in a train that’s been sent to the sidings, followed by a longer moment of embarrassment when you realise your mistake.

When you pass through the shed, I wonder under whose jurisdiction you fall. I can imagine there are issues over “conveyance”, with unions and management holding urgent negotiations to agree terms of safe passage. I hope there are “lucky” entrances, and that superstitions have built up around particular numbers. In bingo lingo, would you prefer two little ducks or a knock on the door?