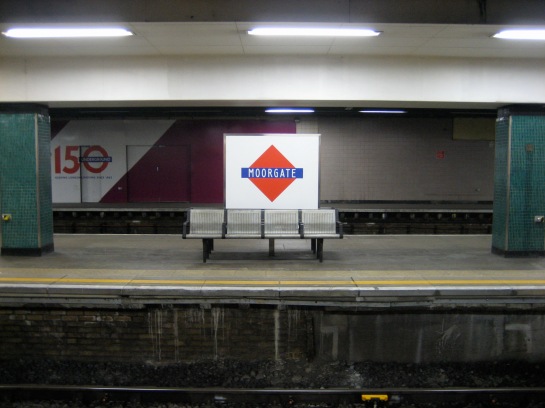 Now here’s a warning from history.

If nothing else, these platform signs at Moorgate are a testy reminder of the perils of a rebrand. The red diamond, had it been given the chance, might have persisted long enough to become stoically tolerated, then grudgingly accepted, then maybe even loved.

But it was doomed, and all thanks to bad timing. The diamond came too late. The roundel had already been conceived. Red discs were arcing out majestically across London when the Metropolitan line, as stubborn as ever, decided to launch its own logo. And worse, it was a logo similar enough to the roundel to make the Met’s behaviour look incredibly petty.

Which of course it was. Mere pettiness never stopped the Met doing anything. But as an exercise in brand awareness, let alone one of design aesthetics, it was amusingly hopeless. 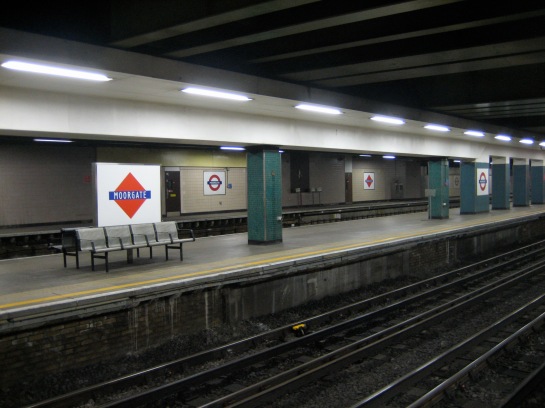 The signs* make Moorgate station a wonderfully eerie if slightly creepy place. For they appear on platforms no longer used by trains, save the occasional service that needs to terminate here.

Yet the platforms don’t look abandoned. Far from it. They feel clean, attended, cared-for. It’s almost as if they were in constant use. But by whom?

There are no security barriers. The platforms are teasingly, tantalisingly, open to anyone. I doubt you’d be able to stroll very far before being stopped… but the temptation is there. As is the potential for misunderstanding. I saw one family start to walk along them, before realising their mistake. I kind of wish they’d have carried on, just to see what happened.

I realise I like these platforms for the wrong reasons – there’s very little logic in loving something that is useless – but they don’t quite sit abandoned in splendid isolation.

Platforms five and six (above) might be completely cut off for trains (they used to be the terminus for Thameslink services) but they’ve taken on a new life as a sort of promotional space-cum-display area. At the time of writing they’re hosting a rather nice mural celebrating the Underground’s 150th anniversary. I hope there are plans for other displays in the future.

Platforms three and four are where you’ll find the diamond signs, casting their spiky glare. And both these and the mural are clearly visible from the Circle, Metropolitan and Hammersmith & City trains that call at platforms one and two. So rather than the old bits of Moorgate getting hidden from view and left to rot, they’ve become a “new” feature of the station: a partially-palatable slice of the past for digestion both now and into the future.

And there’s much to digest. But I’ll think I’ll pass on those diamonds. They’re just not my type(face). 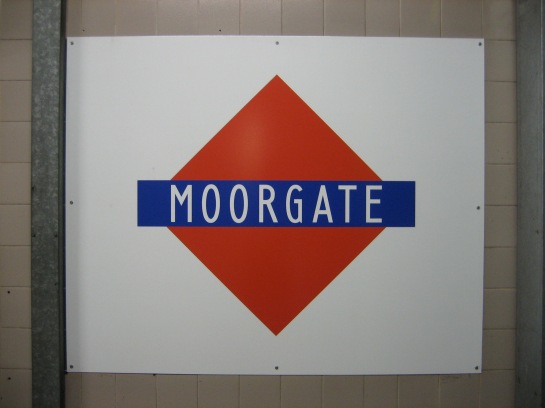 *Cheers to Andrew (in the comments below) for noting that the signs were reintroduced for the 150th anniversary. Will they, along with the mural, survive beyond 2013? 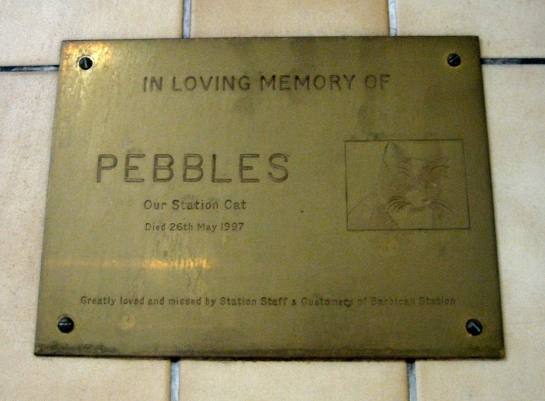 I love cats as much as I love the Underground, cups of tea, Carry On films and other things of varying shades of embarrassment.

But I’m forever disappointed at how badly cats, specifically those who make their home in a particular location, get immortalised for posterity.

Contextualised felines fare especially badly in popular music. Stray cats don’t count. I’m referring to ones who make a specific place their stamping, or rather padding, ground. I can’t find a trace of any song called Station Cat*, the creature doesn’t turn up in the schoolyards remembered by Cat Stevens or Paul Simon, while Farmyard Cat by Prefab Sprout is easily the worst song Paddy McAloon has ever written.

Thankfully there’s at least one cat whose legacy lives on in words, if not in music. Pebbles gets a touching tribute at Barbican station, whose platform nooks and walkway crannies he made his home for many years until his death in 1997.

For part of his life Pebbles had a cohort called Barbie, with whom he apparently shared the run of the station, but about whom no mention is made on the memorial plaque. Both cats were due to appear at a ceremony in 1997, where Pebbles was to have been given some sort of lifetime achievement award before being photographed with Patrick Moore and a gaggle of GMTV presenters.

At least death spared him, and us, this indignity. Instead he remains, to this day, “greatly loved and missed by station staff and customers.” Even by those, like me, who never met him.

*Once I’ve finished all 150 entries, I might remedy this. 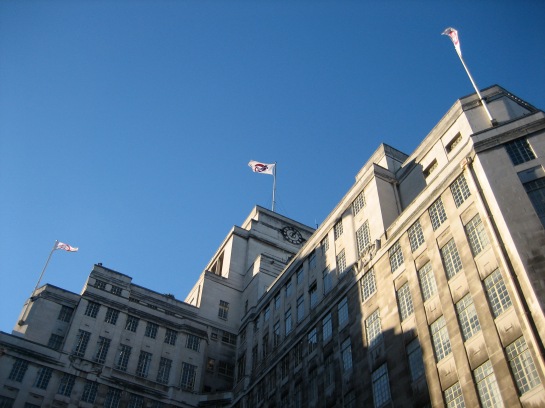 Having already swooned over the statues on the outside of London Underground’s HQ, I feel any further words of my own can’t possibly do justice to the wonder that is the whole of the building.

So I’ll let other people’s words do that for me. 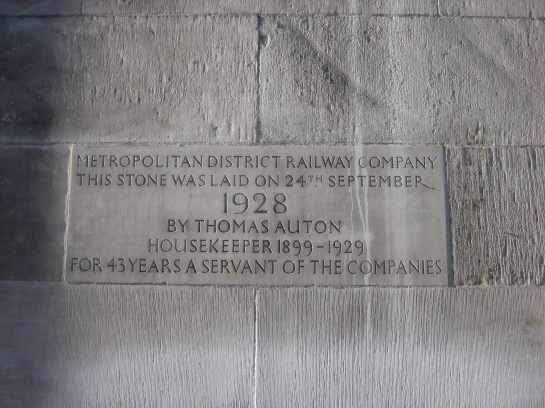 “When I realised the full possibilities of this [building’s] cross-shaped plan – good light, short corridors, and a compact centre containing all services, complete with lifts and staircase communicating directly with all four wings… I do not think I was ever more excited.”
– Charles Holden, 1944 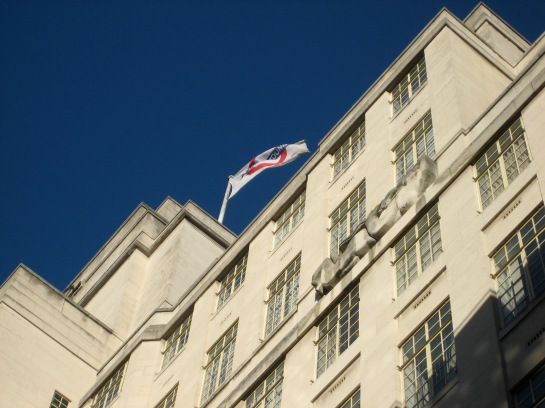 “Charles Holden built embassies of modernism. If you wanted symbolism of a newer world, he was making those shapes against the sky.”
– Peter York, 2013 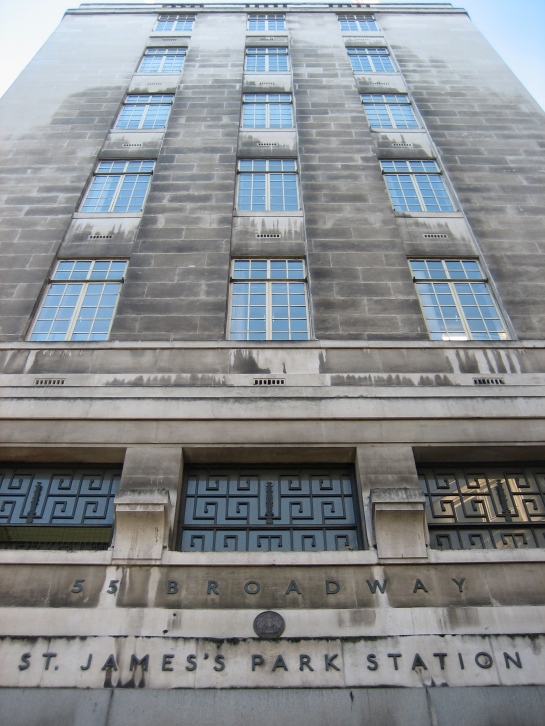 “The building, begun in 1928, was constructed by The Foundation Company and completed in 1930. When finished it had a floor area of 31,000 sq ft. Above the second floor the building had a central tower and four wings, each 48ft wide. The wings necessarily varied in length, the east wing was 100ft, the west was 76ft and the other two were just 60ft. The top of the tower was 176ft above road level, and was surmounted by a 60ft flagstaff.”
– Mike Horne 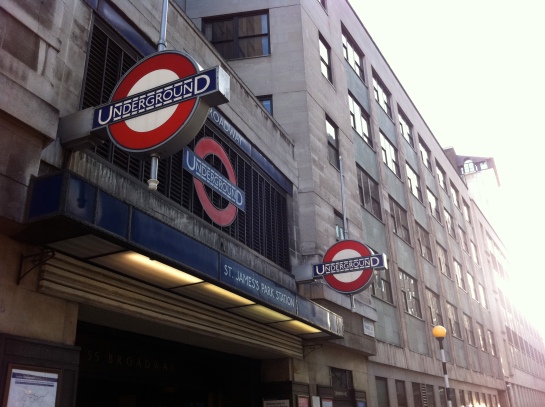 “Frank Pick [who commissioned the building] was the greatest patron of the arts whom this century has so far produced in England, and indeed the ideal patron of our age.”
– Nikolaus Pevsner, 1968 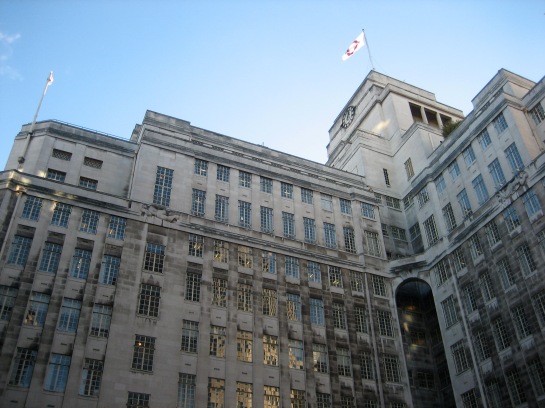 “The historic home of London Underground is to be converted into expensive flats as part of a drive by transport chiefs to raise more than £1 billion. The Grade I-listed building at 55 Broadway… is unsuitable for a modern office, say bosses. Lower floors will be converted into one-bedroom apartments and the rest will be penthouses. LU boss Mike Brown said: ‘Any development must respect the building’s heritage. We will proceed sensitively.'”
– London Evening Standard, 15 May 2013