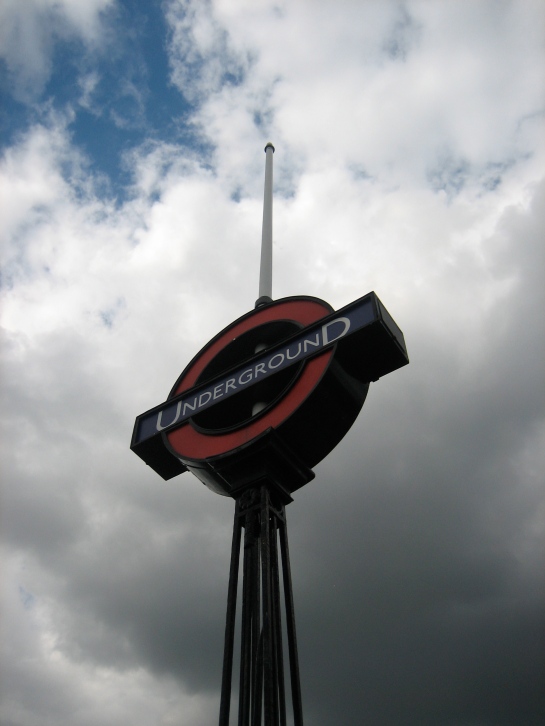 There’s no burned oak at Burnt Oak. There’s not much to the station either, which is a squat pavilion a bit like Brent Cross and Hendon Central, only not as noble or elegant. What there is, however, is a roundel on a pole.

That might not sound much, but believe me, when you’re standing outside Burnt Oak station with 95% of your vision choked up with tat, grot and litter, it’s a revelation.

Even the design of the pole is appealing. It’s vaguely Eiffel-esque, with the struts climbing upwards in a pleasingly ordered fashion, tapering inwards towards the centre of a satisfyingly chunky roundel. The very top looks a bit like a flagpole, but how you’d raise anything up it is a mystery. Although given the whole structure already raises the spirits, I’d argue no further kinds of elevation are necessary.

There’s an added treat when you’re down on the platforms. A gap in the bridges overhead reveals a glimpse of the pole, which from this angle looks even more commanding.

It almost makes up for the station’s gratingly archaic name. There’s really no call for words ending “rnt” nowadays.

I love cats as much as I love the Underground, cups of tea, Carry On films and other things of varying shades of embarrassment.

But I’m forever disappointed at how badly cats, specifically those who make their home in a particular location, get immortalised for posterity.

Contextualised felines fare especially badly in popular music. Stray cats don’t count. I’m referring to ones who make a specific place their stamping, or rather padding, ground. I can’t find a trace of any song called Station Cat*, the creature doesn’t turn up in the schoolyards remembered by Cat Stevens or Paul Simon, while Farmyard Cat by Prefab Sprout is easily the worst song Paddy McAloon has ever written.

Thankfully there’s at least one cat whose legacy lives on in words, if not in music. Pebbles gets a touching tribute at Barbican station, whose platform nooks and walkway crannies he made his home for many years until his death in 1997.

For part of his life Pebbles had a cohort called Barbie, with whom he apparently shared the run of the station, but about whom no mention is made on the memorial plaque. Both cats were due to appear at a ceremony in 1997, where Pebbles was to have been given some sort of lifetime achievement award before being photographed with Patrick Moore and a gaggle of GMTV presenters.

At least death spared him, and us, this indignity. Instead he remains, to this day, “greatly loved and missed by station staff and customers.” Even by those, like me, who never met him.

*Once I’ve finished all 150 entries, I might remedy this.

In the top left-hand corner of the Underground map, the short, stubby branch lines that run to Amersham and Chesham sit there like a two-fingered salute to the empty space beyond.

You think we’re going to come any further into Buckinghamshire, they pout. Well ha ha, we’re not. You’re going to have to come to us. We’re not coming to you.

Our loyalties and life support lie south-east, in the metropolis, not north-west, in the middle of nowhere. We’ve planted our toes beyond your boundaries, and we’re not budging. So there. Cue enormous raspberry.

But this – adopts Adam Curtis voice – is a fantasy.

Trains do run beyond Amersham, despite it appearing on the map as the end of the line.

They run deep into Buckinghamshire, albeit not under the purview of Transport for London. They do, however, run on tracks that once belonged to the Underground – tracks that caterpaulted out of the city in the hope of one day becoming part of a hilariously ambitious uber-network that would link northern England with the continent.

Now look at it.

That’s the very last roundel passengers on the mainline get to see.

No longer does the Metropolitan sneak its way up to Aylesbury. That ended in 1961. It used to puff its chest out even further, stretching the elasticity of the system to breaking point in order to poke a smoke-filled nose into Verney Junction. That ended in 1936.

I’m taken with the frontier feel of Amersham – a place, before I moved to London, I knew only as the one and only sighting of the dreaded Red Hat of Pat Ferrick.

It’s just far enough out of London for the Underground to venture and still allow you to sense the faint pulse of the city. It has a rather attractive trace of desolation that never threatens to develop into full-blown abandonment.

Travelling up the Metropolitan line, you’ve unwound your ball of purple wool as far as it can go, threading it all the way from Baker Street through Wembley, Harrow, Pinner and Rickmansworth.

Now the wool has run out. But one tug of the strand and you can find your safely way back home again.

Sure, there’s always platform 1, with its bittersweet invocation of British Rail above its promise of the faintly exotic-sounding Great Missenden and Wendover.

But platform 3 is where London begins, and where the Underground devotee can affirm their love affair all over again.

You can stare all you like at the countryside beyond the buffers. But “in those wet fields the railway didn’t pay. The Metro stops at Amersham today.”