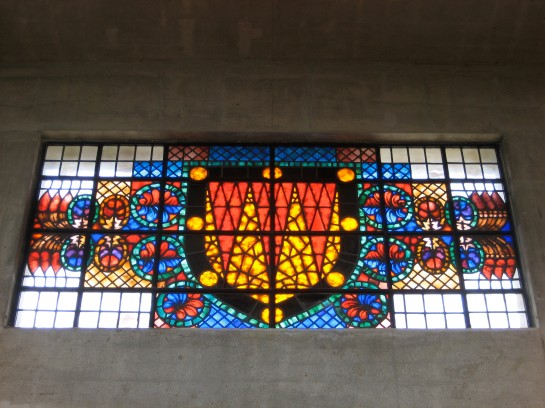 I think this might be the only station on the Underground that has stained glass (though I’m more than happy to be proved wrong).

The three panels sit above the exit and are only visible to people leaving the station: a fitting location for what is essentially a translucent multi-coloured equivalent of a “Welcome to Uxbridge” slogan: 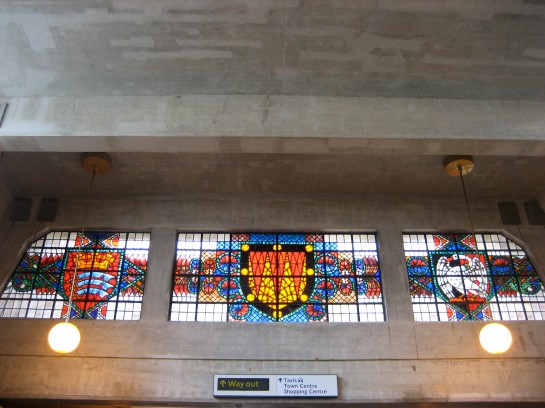 They were created by the Hungarian artist Ervin Bossányi, who emigrated to the UK in 1934: just four years before Uxbridge station was rebuilt in its present form to a design by Charles Holden.

During a hugely successful career in this country Bossányi would make stained glass for, among others, the University of London, the Victoria and Albert Museum and York Minster.

But the three designs he produced for Holden must count statistically as his most viewed – and perhaps simultaneously, like Oliver Hill’s bus station at Newbury Park and Eric Aumonier’s archer at East Finchley, his most under-appreciated, by virtue of their home being not an imperious seat of learning or popular tourist attraction but an ordinary railway terminus.

Of course I would argue that Uxbridge is anything but ordinary, and I’ll return to rave about some of its other stunning features another time.

For now I’ll merely sing the praises of this trio of handsome gems, which depict, from left to right: the arms of the old Middlesex County Council, an institution abolished by Tory minister Keith Joseph in the early 1960s; the arms of the Basset family, esteemed local landowners of centuries’ standing; and a historic emblem of Buckinghamshire.

And were there ever need for a more contemporary representation, may I suggest something to do with Press Gang, which was filmed in Uxbridge and which remains the finest children’s TV drama series ever made.