If you’re ever inclined to literally worship the London Underground, the chapel-esque hues of Turnpike Lane would be a good place to start. And also something of a God place.

The towering segmented portals that climb the station’s giant walls could almost pass for sort of atheistic stained glass windows. They certainly perform a similar function, allowing natural light to pour into the vast, nave-like interior, while a hushed reverence envelops the building like a particularly voluminous cassock.

Not that there’s anything sacred to glean from either the station’s function or design. There’s much that is gloriously profane about Turnpike Lane, as there is of almost any Underground station. The warm inclusiveness, the non-denominational throng, the absence of anyone passing judgment: this is the kind of church I’d like to belong to. Look, there’s even a spire:

Yet another winning throw of the dice from Charles Holden, the station opened in 1932 and has been Grade II-listed since 1994.

But it’s not in the best of shape. As you pass through the exterior walls and descend, as if arriving at a Baldwin-era society bash, to the ticket hall, amid the grace and glamour are barely-disguised patches of growing decay. Much like the entire Baldwin era, in fact. 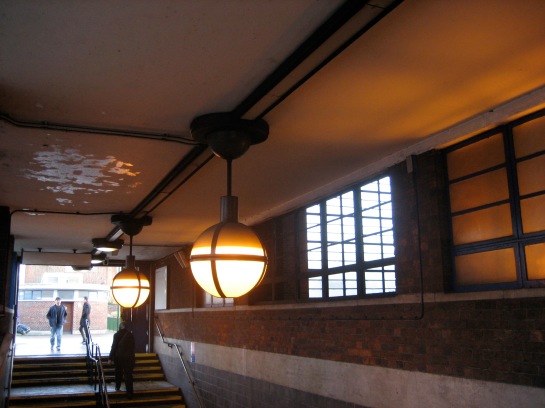 Still, the orange and purple ambience casts enough warm appeal to make up for the damp. Someone needs to pass the collection plate around City Hall soonish, though.

It’s well worth making a pilgrimage to Turnpike Lane to soak up some of its bracingly modernist and vaguely sanctified air. It’s TfL’s very own Lourdes: a place to rejuvenate your soul, with trains to central London every two minutes.

And don’t worry: unlike the Church of England, everyone is welcome here.